The New Reception Building of Portugal dos Pequenitos is located on the left bank of the Mondego River, in Coimbra. Despite being outside the “Uptown” and “Downtown” of the city, it is an area characterized by a high degree of monumentality, since in addition to the Monasteries and Convents there are also historical buildings such as Paços da Rainha Santa Isabel, Quinta das Lágrimas and Portugal dos Pequenitos.

Portugal dos Pequenitos was commissioned in 1937 to the architect Cassiano Branco, located in Rossio de Santa Clara. The Park, despite having its autonomous structure, should also be understood as complementary to the educational project of Casas da Criança, named Rainha Santa Isabel. Cassiano Branco recognizes the importance of the project, understanding it as a challenge, due to its unique pedagogical sense. The architect regrets the “values ​​that have been lost, due to the abandonment of many thousands of students, victims of the incompetent and demanding teachers” in his descriptive memory of Portugal dos Pequenitos, envisioning a “Portugal dos Pequenitos as a library for children, to be seen by all there senses. (…) Every child reads it with the intimate satisfaction of learning without effort; and [it was] precisely this pedagogical aspect, which the natural school of Coimbra of men did not [have]”.

In this way, he also states in his descriptive memory that “Portugal dos Pequenitos should not be considered a museum of architectural miniatures in Portugal. This judgment would limit the intelligence and culture of those who considered as such, as they did not realize the pedagogical feature of this work, inspired by the methods recommended and defined by the greatest pedagogues, such as Pestalozzi, Froebel, Montossori and others and carried out with the aim of teaching the child, recreating it. ”

The architect's concerns met the social action idealized by Bissaya Barreto, giving rise to a park consisting of replicas, on a small scale, of monuments and buildings representative of Portuguese culture and heritage.

Portugal dos Pequenitos is a space destined to the Portuguese ethnographic portrait, whose means of communication is architecture.

The concept of the New Reception Building of Portugal dos Pequenitos has as its starting point in the very basis of Portuguese culture - the route, the journey and the discoveries. Just as the park invites this journey of immersion in Portuguese roots, closely linked to the sea and the discoveries that it has made possible, we have identified the interpretation of the trip as a central point of the proposal, through a contemporary look.

Curiosity, so inherent in the Portuguese people, is transposed into this universe through the eyes of a child. The Park symbolizes this journey of (self) discovery of Portuguese heritage and essence - a sensory world, symbol of the other dichotomies, interior and exterior, of a discovery.

Anticipating the child's creative universe, the aim is to create a building that allows the development of numerous processes of interpretation, where he will be able to deposit his memories empirically and create new and multiple associations. This interaction and discovery exist mainly through this concept of travel.

Stable on land, it launches with the sails in the wind - the building refers to the nautical forms of the Discoveries' vessels, symbolizes the sea, reflects the diversity and the desire not to anchor to the land, to leave on a trip.

The New Reception Building of Portugal dos Pequenitos is an addition to the urban experience, evidenced as a hinge of time/material that promotes the surrounding area.

It is our understanding that the building contains form and content, solving programmatic themes, to create a conversation with the city, transforming the heritage of this block through the public space.

Our proposal for exterior arrangements does not intend to change the design of the urban layout, but does provide for the improvement of road traffic in the area. The challenge in this project is to work at different scales, guaranteeing a coherent and highly sensitive language, mastery and vision about the “biggest” and the “smallest”. With attention to detail, we want to strike a balance: a proposal that relates to the New Reception Building of Portugal dos Pequenitos and that adapts to the surrounding urban issues. Everything complements and relates.

We propose to enlarge an urban area that is currently devitalized and make it functional: to call more people to this area, design a noble arrival at a Building that will be part of the history of Coimbra and Portugal.

In this way, the design of the space was made in a geometric way, with alignments that invite you to walk towards the building, allowing different paths and privileging the best views. We want this space to be pedestrian and inviting, so we created a game of benches and trees that can gather groups of people: whether to be outside, to “organize” the groups that will visit the park, etc.

The entrance to the Building is made by the central axis of the line that divides the Public Space of the Building, which corresponds to the tallest sail. The ante-chamber has a maximum height of 7.30 m, then there is the entrance lobby whose height increases to 9.30 m, in order to create a surprise effect combined with the game of scales. The program is distributed according to a game of full and empty, where the full are spaces of service and support, and the empty spaces are spaces for living or leisure. The full spaces are reflected in four boxes distributed along the longitudinal axis of the building, topped by two poles at the ends.

The lobby, the first void, is flanked by two (full) boxes whose services are associated with the entrance to the building: ticket office, supplier room, lockers, female and male toilets, two toilets according to accessibility, information desk and a clean pantry serving the cafeteria. On the east side, there is a cafeteria (empty), a dirty canopy, a waste treatment area and employees' spas (full), topped off by the events room. On the west side the store (empty), store storage, infirmary and cleaning room (full) are developed, finished off by the pedagogical center.

Entering the building we are “under the sea”: the candles are thrown over the boxes and the floor. Here we want to show the contrast between the cover x boxes, lightness x support. The light is mostly zenith, also complementing the idea "under the sea".

The façades remain like sails that emphasize the mutation of their own forms depending on the daylight.

In order to have a space that tells a coherent story, the roof is made of concrete with application of high and low reliefs in ceramic. In this way, the scale texture is recreated, drawing sparkles of sparkle, just like in nautical sails. 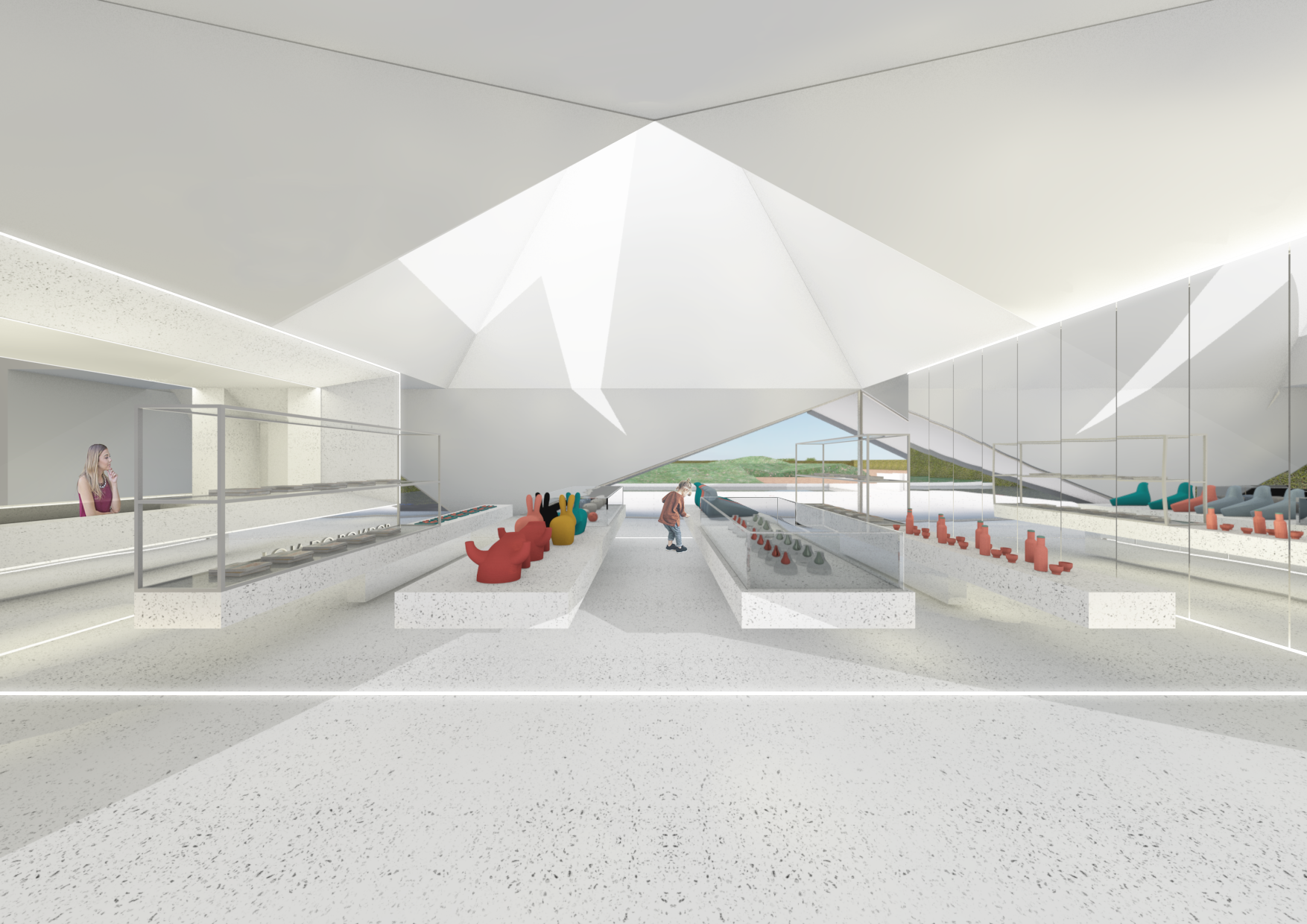 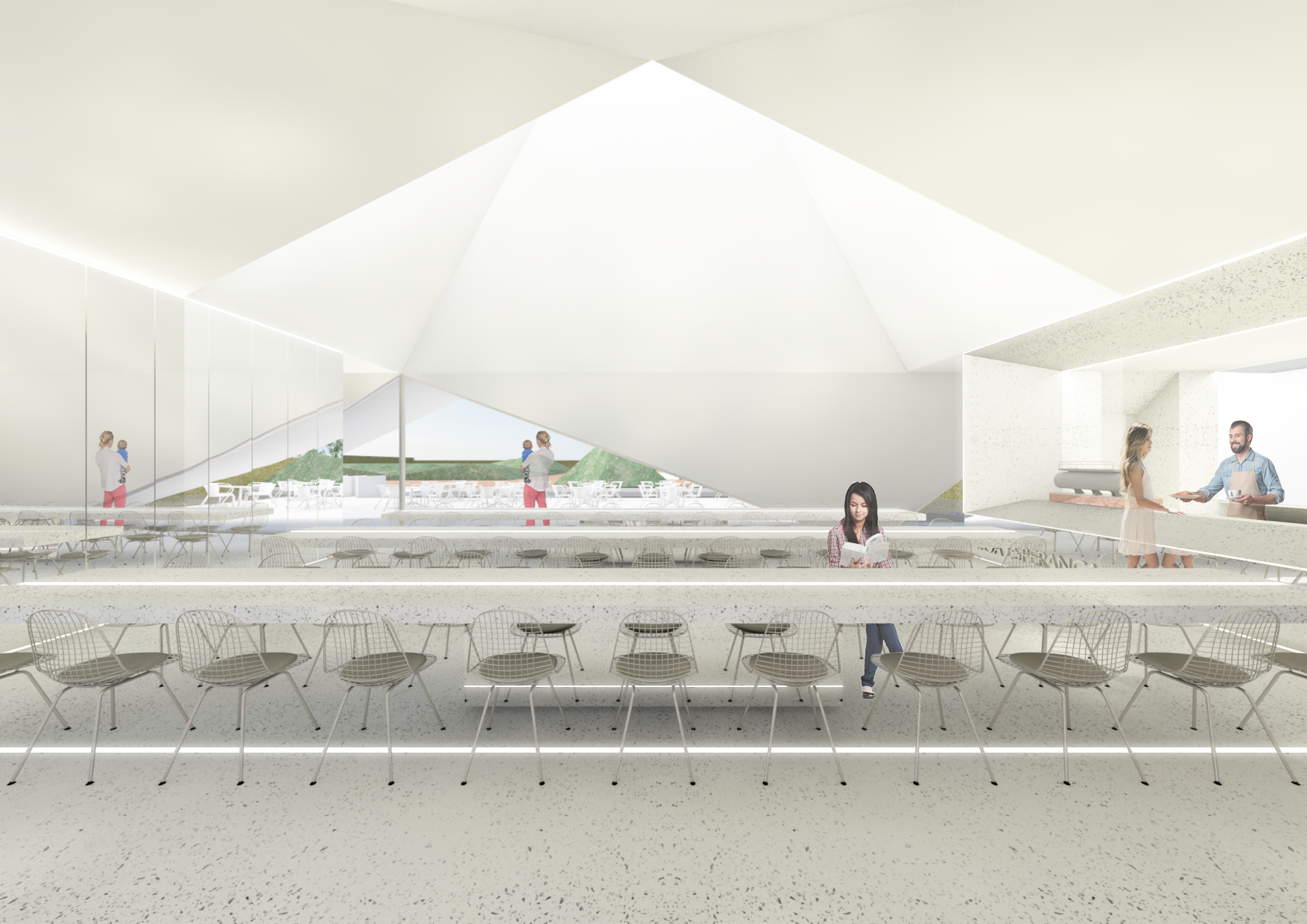 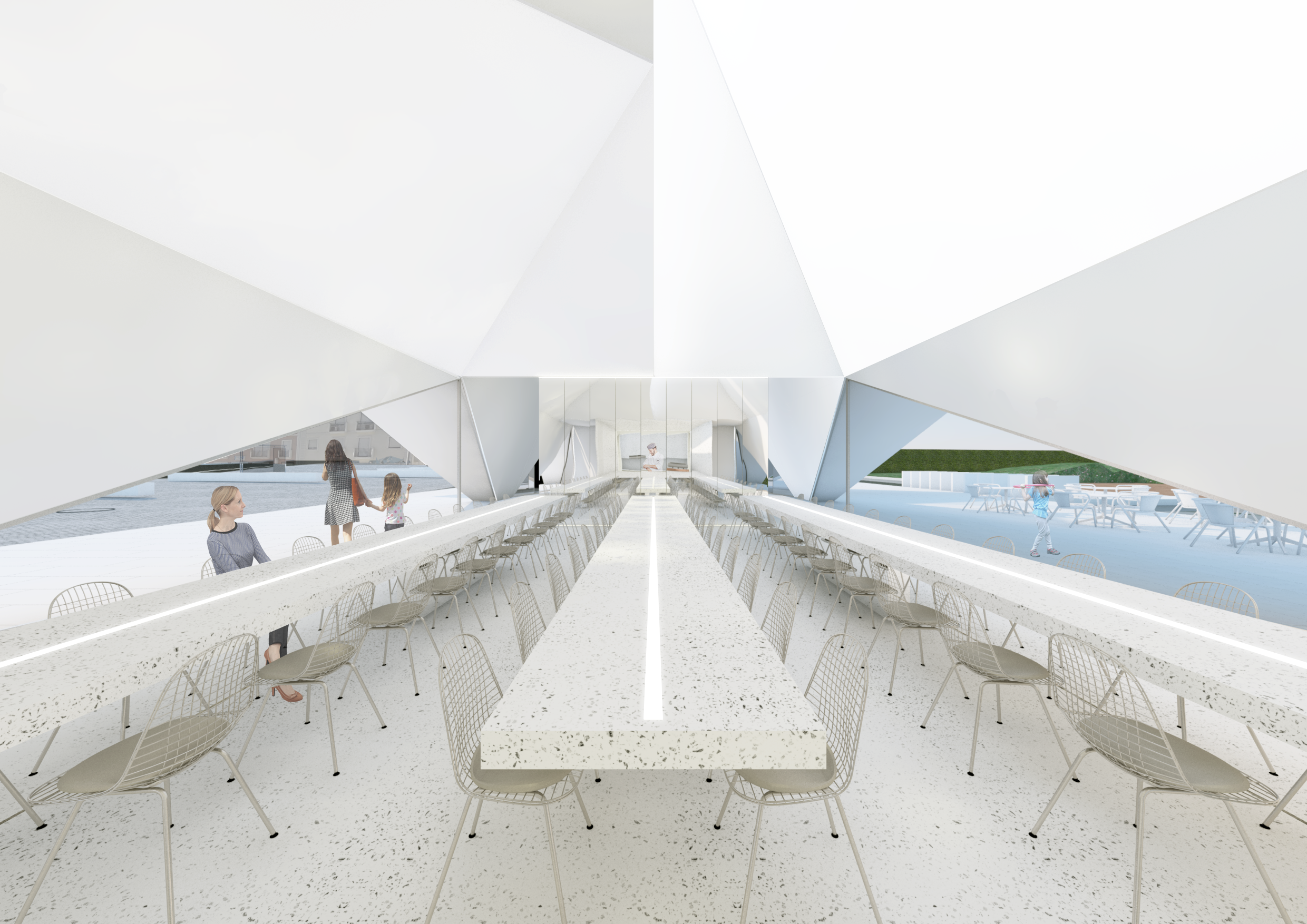 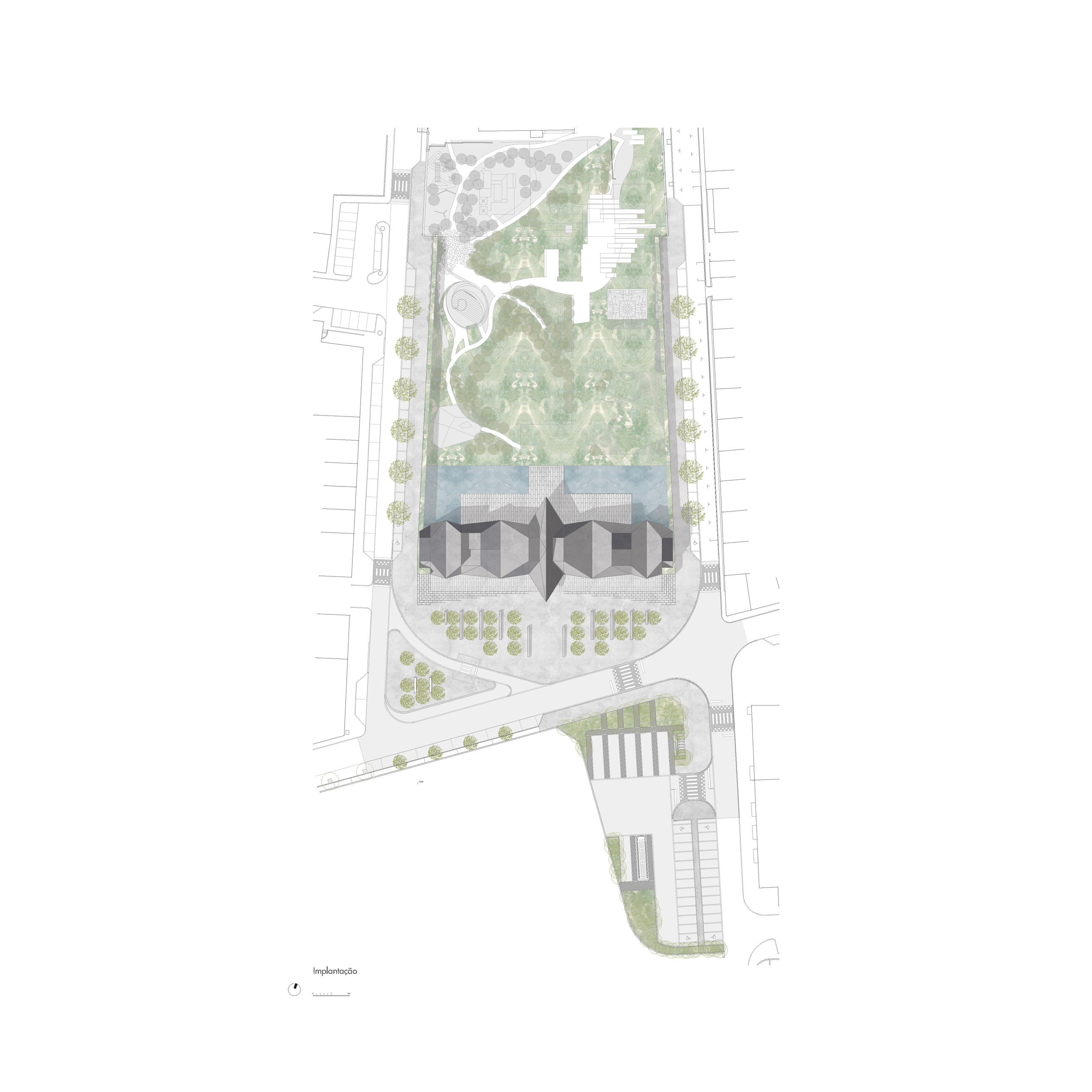 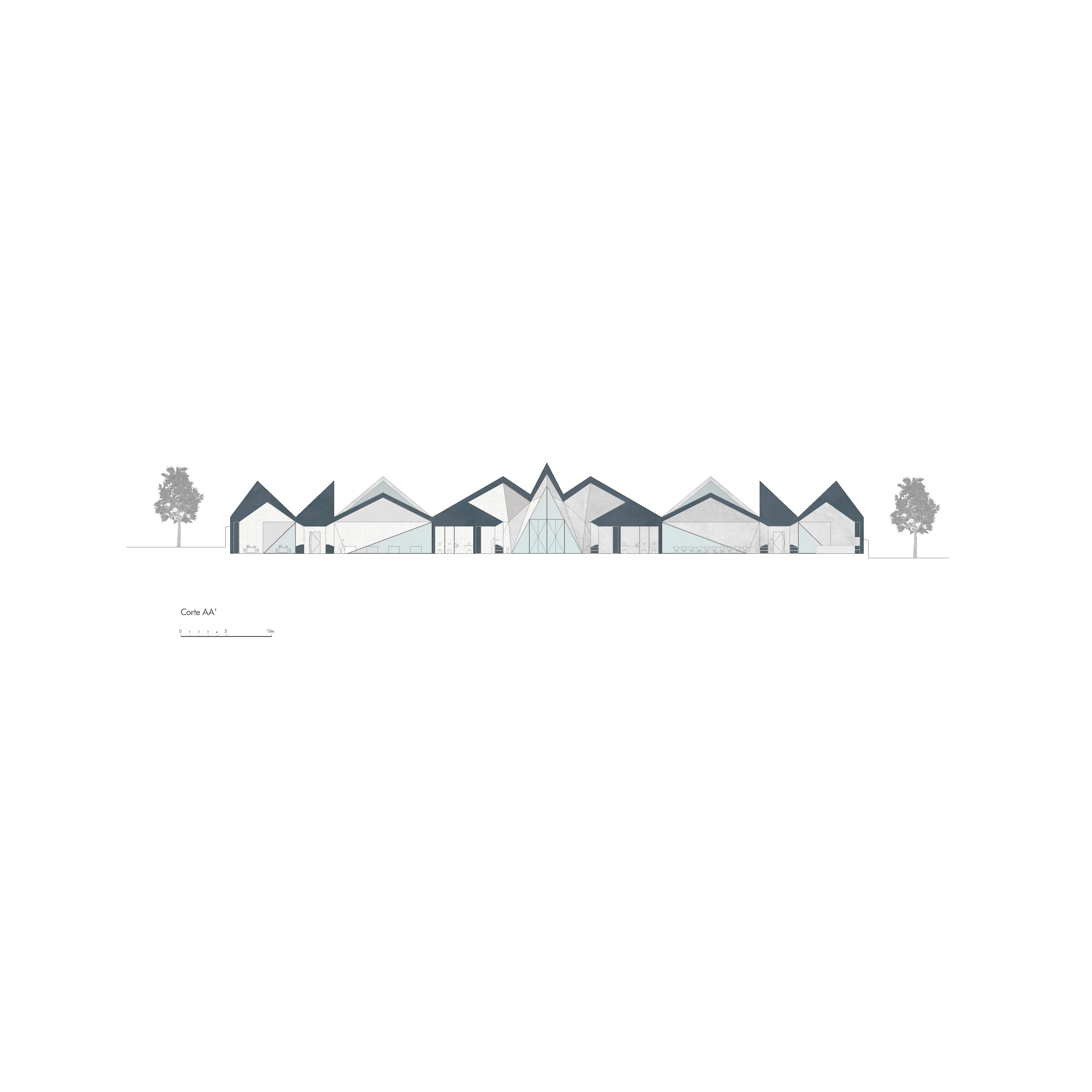 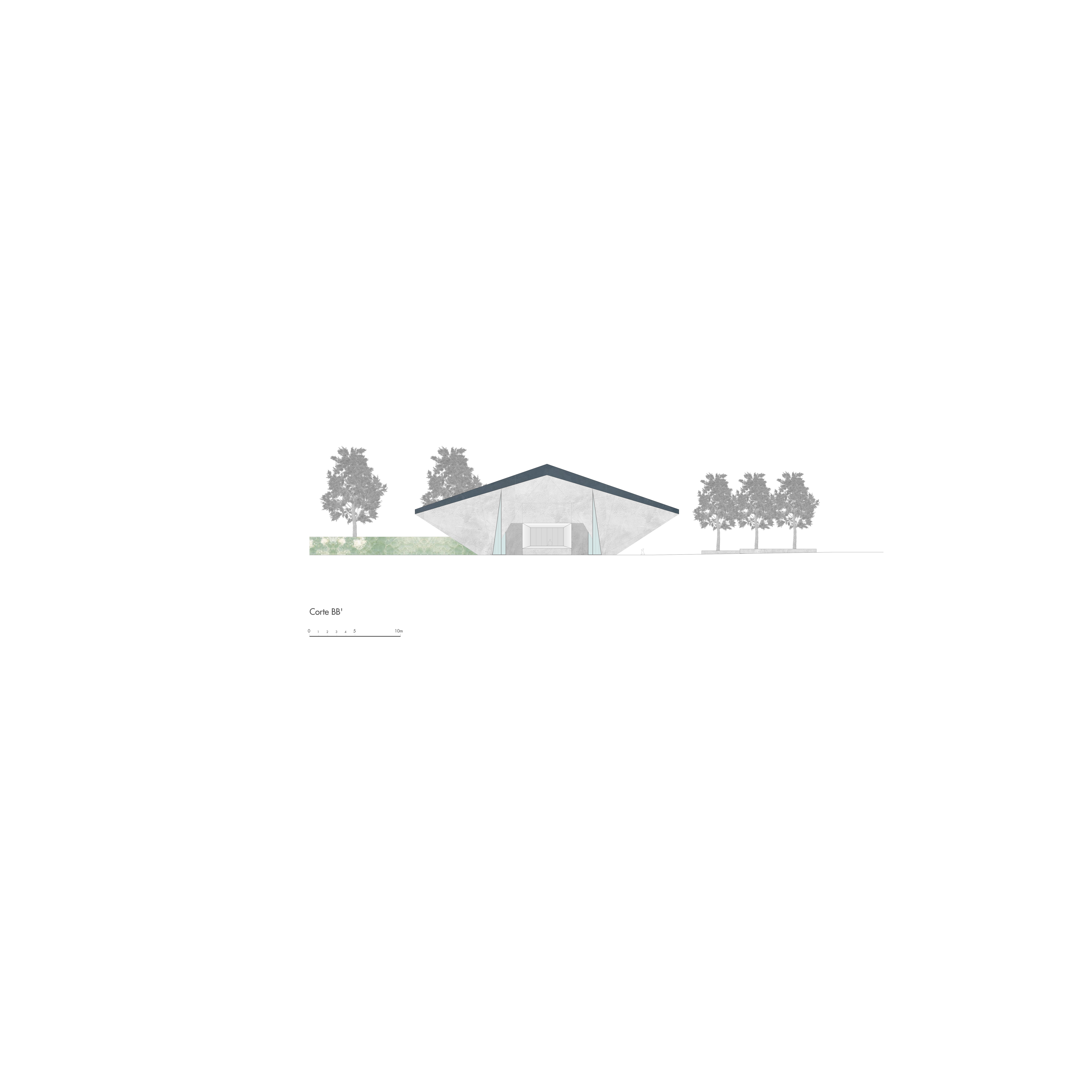 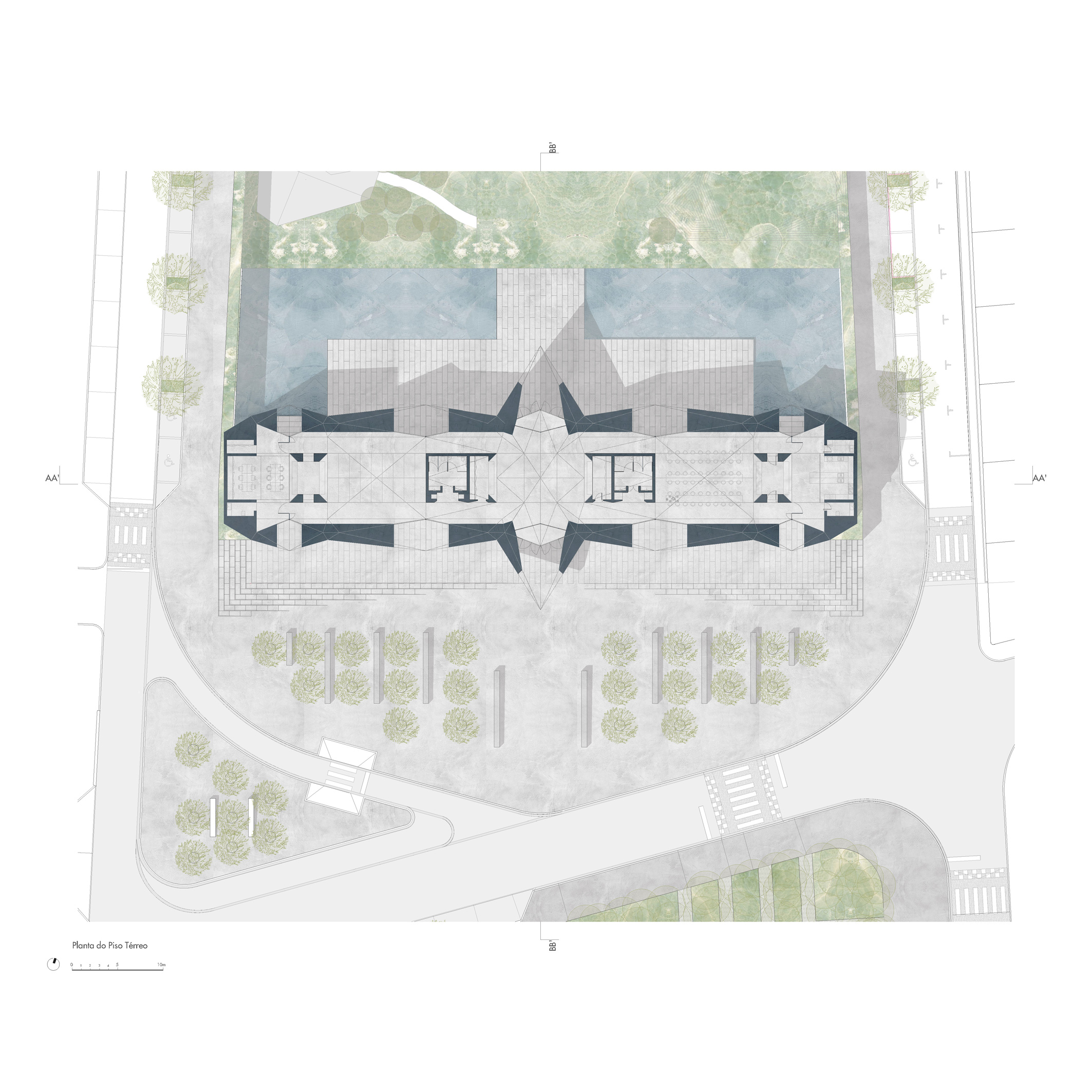 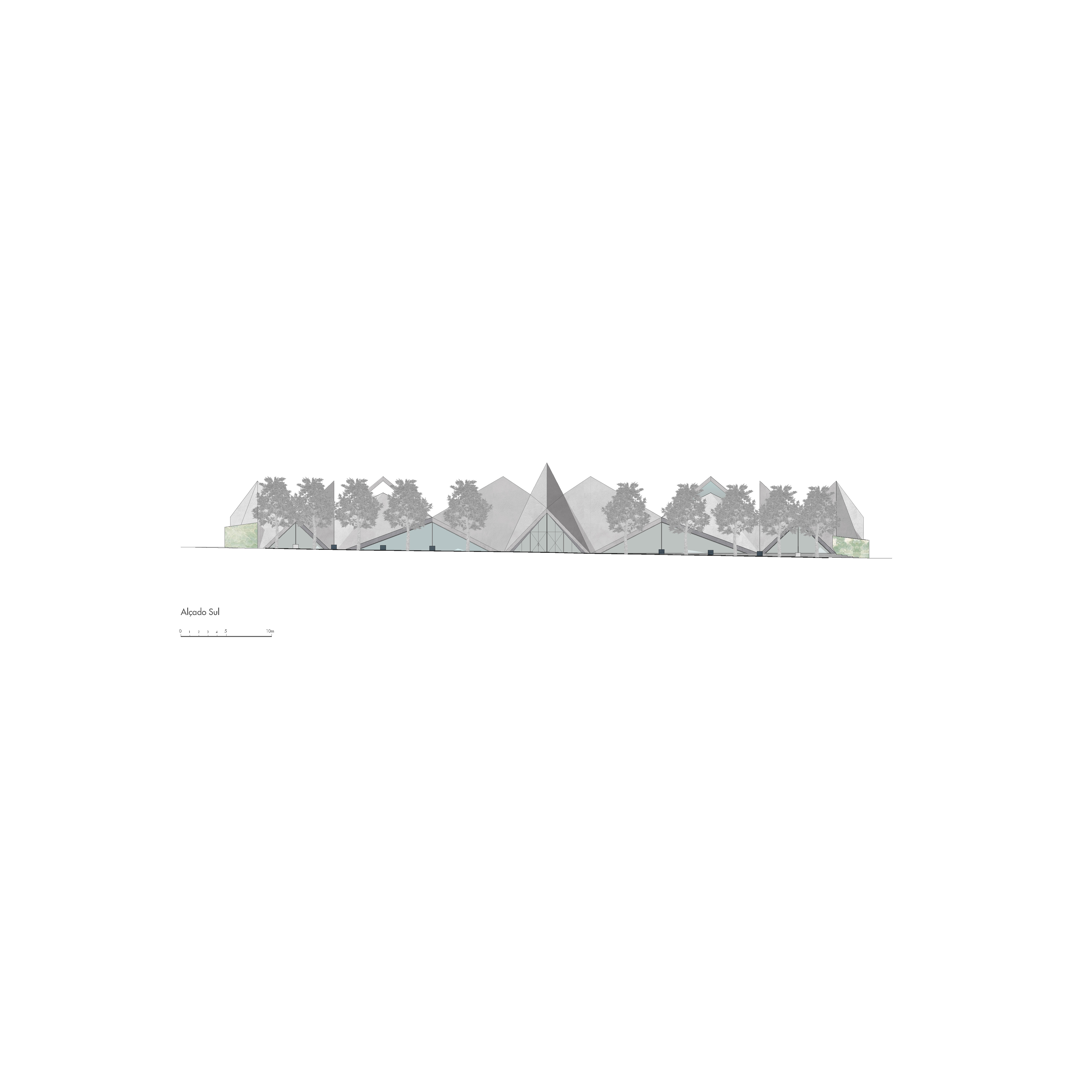